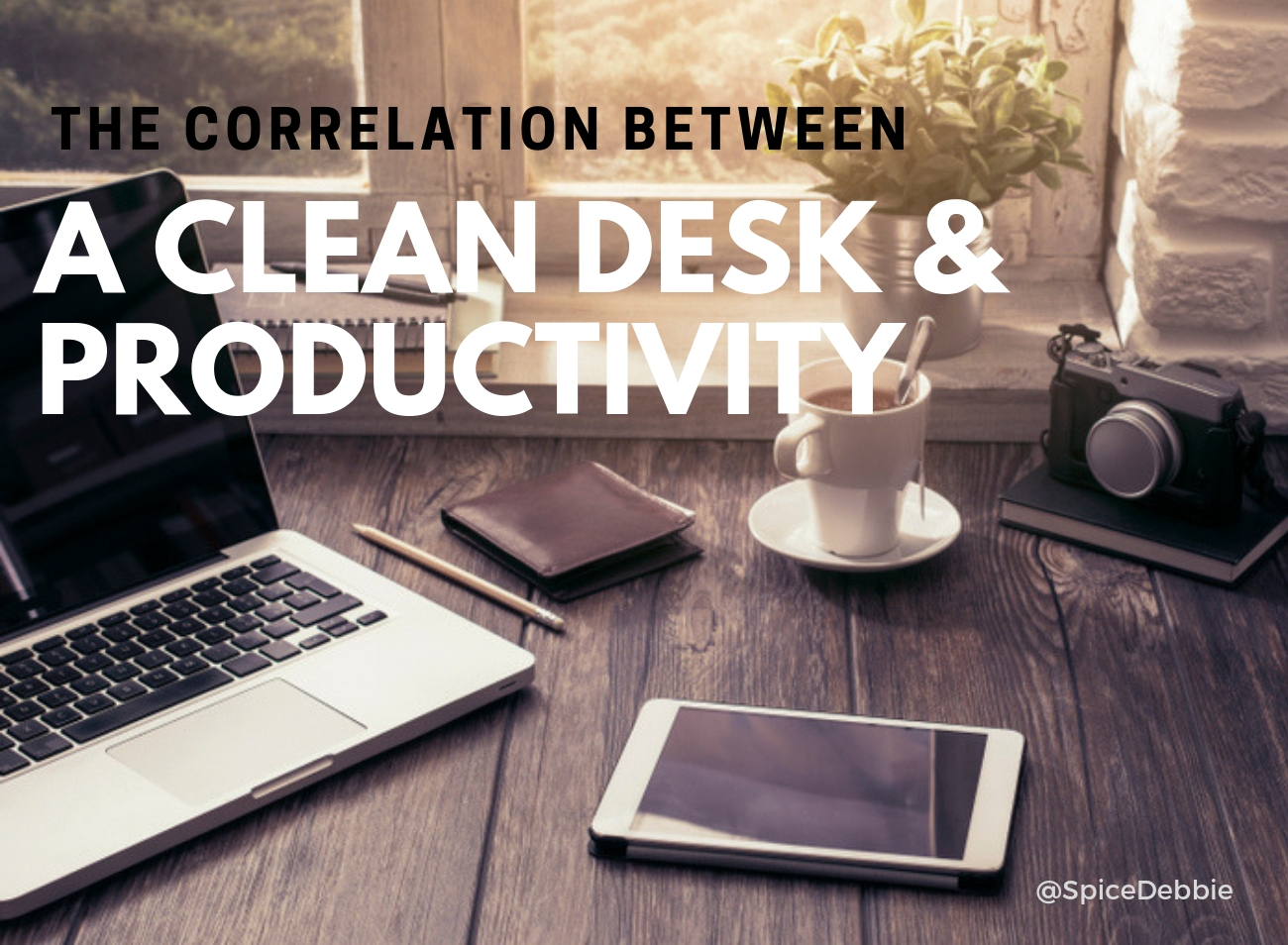 Are you more productive when you work from a clean desk?

So I thought I would give some thought to the topic of focus and productivity as it relates to a clean desk or office. How about I walk you through a few different theories, and you can decide of cleanliness and productivity are positively correlated?

insert graphic about things on your desk to desktop

There’s an 1800’s era phrase “clear the deck” that provokes the first thoughts about cleanliness and productivity. According to Dictionary.com, “this expression originated in naval warfare when it described preparing for battle by removing or fastening down all loose objects on the ship’s decks.”

The purpose of this activity was to eliminate anything that would inhibit the crew person’s sight or create an obstruction during the actual battle. In other words, it helped the naval personnel focus on the task at hand – a battle – without unnecessary obstructions.

Relating this to your desk, assume what needs to be cleared is clutter and paperwork. Inc. Magazine suggests, “a disorganized desk leads to misplaced documents, lost information, and increased stress.”

While this could indeed be true, I’m not sure this is a strong enough argument to convince me that the mess on my desk might reduce my productivity. However, I would have to agree that I have difficulty finding things in the piles of paper on my desk. I have the same issue finding documents I’ve saved on my computer as well.

So while it may be of critical importance to clear the deck in a battle situation, I’m not sure it has the same impact in work life.

Suze Orman on Being Organized

I wish I could find the reference for this, but it’s probably within the confines of a physical book I don’t own. However, I once heard Suze Orman speak about the psychology behind seeing physical clutter (consciously or unconsciously) and distraction in your brain.

The idea was that whether you thought about it or not, the physical clutter around you made it harder to focus on your goals. Subconsciously, your mind wanders to the clutter that surrounds you.

In a work situation, this makes sense. While I’m working on Project A, the papers for Project B, C, and Y are within eyeshot. Psychologically, my brain could be distracted by these other and very different projects.

Now as my memory serves, Suze’s reference was related to the guilt your brain feels about the money you’ve wasted on things that are now clutter. Her suggestion, throw it out, and the guilt will go away, allowing you to refocus your brain on your financial goals, rather than beating yourself up for prior wasteful spending.

I’m not sure about you, but I’m a little more convinced about clutter and reduced productivity with this theory. Our powerful brain is working subconsciously even when we attempt to avoid these thoughts.

Our friends at Marketing Profs throw it right out there. That is, a clean office boosts productivity. And they created this awesome infographic to support their correlation. The finding sites a super interesting study by Harvard University where students were placed in a puzzle-solving scenario. The conclusion, “messy, untidy workplaces can undermine people’s persistence in completing tasks, therefore affecting productivity.”

This is an incredibly polarizing topic, and in fact, you can find support for either side of the argument if you look. Our friends at the University of Minnesota suggest that

“Participants in the messy room generated the same number of ideas for new uses as their clean-room counterparts. But their ideas were rated as more interesting and creative when evaluated by impartial judges.”

Also in this study, is the suggestion that there is a complete offset in time spent on productive tasks versus by organizing tasks. In other words, taking time to organize is not exactly a productive task. Or is it?

While we could keep going, I would say it’s time to draw your own conclusion. Personally, I’m going to side with the power of my brain. That is, I believe that when my office space is messy, I have a harder time focusing on the task at hand. Metaphorically speaking, I would say the same issue exists when I have 42 tabs open as well. So I will opt to clean up.

Where are you on the issue?